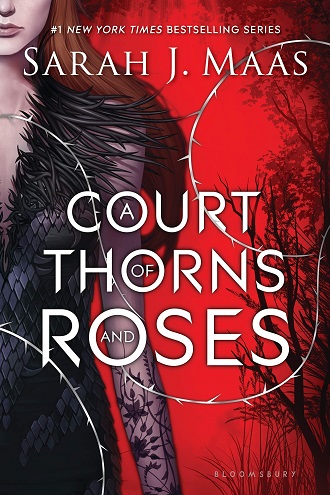 Categories: Books, Hobby, Reviews
Tags: Book review, Fantasy, Sarah J.Mass
Author: Sarah J.Mass
Genres: Fantasy, Romance
Series: A Court of Thorns and Roses
Feyre's survival rests upon her ability to hunt and kill – the forest where she lives is a cold, bleak place in the long winter months. So when she spots a deer in the forest being pursued by a wolf, she cannot resist fighting it for the flesh. But to do so, she must kill the predator and killing something so precious comes at a price ...

I downloaded the book months back and forgot about it. In my effort to catch up with my book reading challenge on Goodreads, I sieved through my unread books and found it. I didn’t even remember why I downloaded it. Perhaps it was a recommendation in Goodreads. In any case, I decided to finish reading it over the weekend. Finished it I did and these are my thoughts on it.

It is a fantasy novel with a girl called Feyre (Fayruh) as the protagonist. She came from a family that once lived in the lap of luxury but fell from grace, and the onus of keeping her family alive laid on her shoulders from a very young age. She had made a vow to her mother on her deathbed to care for the family, so she worked her fingers to the bone and hunt to provide for her family. It was during one of her hunting trips that she met an enchanted wolf and killed it, only to find out that it was in fact one of the High Faes of Prythian. For this mistake, she was taken away from her family, by the High Lord Fae, Tamlin, to live with him as a replacement for the one she murdered.

Since I didn’t read the synopsis of this book nor reviews before I read this book I didn’t know what to expect and after reading a few chapters of this book I realized that it reminded me of “Beauty and the Beast”. Surely enough, Tamlin, who had taken Feyre as a prisoner, was under a curse. Not only his powers were curbed and controlled by an evil Fairy but he and along with those belonging in his domain were tricked and  doomed to wear half face masks for as long as the curse had a hold on them.

I have to admit that the first few chapters of the book was a bit too slow for my taste that I almost gave up. I am sure it was just a build up so that what ever happens at the end would all make sense. The story was told rather well that after the initial boring pages and when things started to pick up pace, it was tough to put the book down.

Now, I enjoyed the story enough to read the book till the end in just a couple of days. But I can’t help to have mixed feelings about it as I am not sure I like the heroine of this book, Feyre.  I do like my “tsundere’ or strong female characters. However, Feyre annoys me. She was taken as a prisoner by Tamlin in exchange for killing one of his own men. She should be punished for this yet she was treated with mercy and kindness and her family was taken cared well back in the human domain. For someone expecting punishment she is rather self entitled and proud.  Perhaps also, I felt that she got it easy to just fall in love with an attractive guy with just a mask on instead of a real ugly beast. 🙂 With that sort of character, I doubt she would fall for an ugly beast. In any case, her saving grace is her loyalty to people she cared for and the trials that she had to go through had redeemed her in my eyes somewhat. Though, her pride made it more difficult to make myself to like her the way I liked Belle from Beauty and the Beast.

So, I would say if you like stories where the girl needs to break the curse on a mysterious and sexy prince charming, this is for you. Will I be reading the sequel? Perhaps yes, when I can forget how I disliked the main character. 🙂